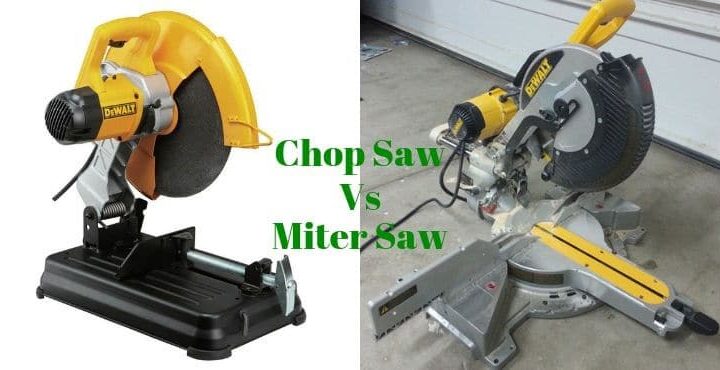 Chop Saw VS Miter Saw : Which One Should You Pick?

You’ve found yourself in the position where you need to purchase a new electric saw. Be it that you’re in to your DIY and want to undertake home projects and renovations, or you need one for your day to day job. So which saw do you choose? Do you choose a chop saw or miter saw? Whilst they may seem similar, there aren’t actually that many similarities between them. Don’t worry though, I’m here to help you chose the correct saw for the job at hand.

The Difference Between The Chop Saw and the Miter Saw

Chop saws and miter saws are both similar in appearance to one another. They both feature a circular cutting disk which is lowered onto the material that you want to cut. However, this is where the similarities then end. Chop saws are often bigger and more powerful than miter saws, but they only have one application, to cut at 90 degree angles. People often think that chop saws are often only used in commercial and industrial settings, but if you have a big job that you want to complete, then there is no reason why you can’t have one at home!

A chop saw is an excellent choice of saw if you are making straight cuts into wood. Whilst they look similar to a miter saw, they are often a lot more powerful. They are designed and built to make repetitive cuts into wood at a 90 degree angle. Don’t let the size and power put you off though, they are safe to use as long as you do so within the manufacture’s guidelines.

These look like smaller versions of chop saws. More often than not, they are not as powerful or as large, this is because you can manoeuvre them to make different types of cuts. Miter saws have more practical applications than the chop saw. If you’re looking for a tool that doesn’t just cut at a 90 degree angle, the miter saw might be the one for you.

How Do You Use These Saws?

Chops saws are relatively easy to use, firstly you need to familiarise yourself with the manufacture’s guidelines and recommendations. Make sure you have a clear area to work in and wear appropriate safety gear, such as eye protection. Once you have done all these, you can then begin to use them.

The chop saw is relatively easy to use, once you power the tool on, you simply move the circular blade down by the handle onto the wood you want to cut. It will then make a 90 degree cut through the wood; you lift the blade up and start again.

As I have previously mentioned, you can use a miter saw to cut a variety of angles. Because of this application, it means it can take a little longer to set up than the chop saw. Most miter saws will allow you to select 45 degree cuts and 30 degree cuts, with some even allowing for 90 degree, thus doing the job of the chop saw.

Select the angle that you wish to cut, lock this angle in, the blade will then be set to this angle. Place the wood next to the fence to keep it secure and straight and then pull the circular blade onto the wood and then lift it back up.

The operation of a miter saw is very similar to that of a chop saw but it gives you more variety of angles. It does take longer in the initial set up as you have to pre select the angle you wish to cut, but once you have done that there is no difference in operation than a chop saw.

Which Saw Do You Choose?

Both the chop saw, and the miter saw have different applications, but for DIY’ers and professionals alike. If you are into your DIY, then maybe a miter saw is the way to go for you. When you look to purchase one, make sure you select one that has a 90 degree cutting capability. If your miter saw has this function, there is no need for you to have a chop saw as this setting fulfils this.

However, if you are cutting large pieces of wood, such as ceiling joists or larger pieces of timber at home, a miter saw may not be the one for you. You need to consider how and what you will be using the saw for and this will determine which one you purchase.

If you need a powerful saw that only does 90 degree cuts, then the chop saw is the choice for you. If you need it to cut big pieces of wood and only at a 90 degree angle, there is no competition. The chop saws are often more rugged and durable as they are designed for site life and bigger pieces of wood. Again, it is all down to how you will use the saw.

Whilst chop saws and miter saws may look similar, they both do very different things. Chop saws are bigger and more powerful and ideal for cutting bigger bits of wood and timber but only at 90 degrees. Miter saws are smaller and are more precision based for cuts at an array of angles so you can do a multitude of jobs.

Your choice will always be dictated on how you plan on using the tool. If you only need 90 degree cuts, the chop saw is the one for you, if you need to make angled cuts for items such as fencing then the miter saw is the right choice. You can also purchase miter saws with 90 degree saw settings, so you still get the benefit of a chop saw without having to purchase two tools!

Make sure to always follow the manufactures safety guidelines and wear protective clothing when you are operating these tools. If you are a first time user, familiarise yourself with the instructions and then get cutting.