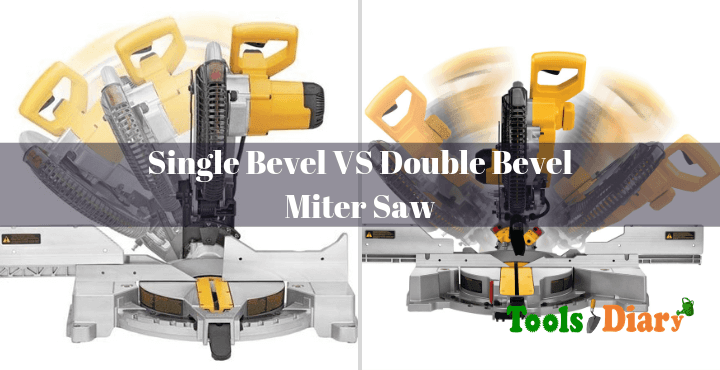 Single Bevel VS Double Bevel Miter Saw : Which One Is The Best Pick?

A miter saw is the one of those tools that everyone needs in their shed, on their work bench or even on site. They are an excellent and versatile tool that will allow you to cut wood at a variety of angles and for some people; it will rid the need of having other tools such as chop saws.

Before you go to the store to pick up your new miter saw, you need to decide which type it is that you want. If you’re unfamiliar with miter saws, it might be here that you are asking the question of ‘aren’t all miter saws created equal’, well in this case, no they’re not. Don’t get overwhelmed though, I’m here to help you decide what miter saw is the best for you and what the difference is between the single vs double bevel miter saw.

What is a Bevel?

First things first, let’s clear up what a bevel is, the simplest way to put it is that a bevel is an angled cut, think of a door stop and how that moves from thin to thick. A miter saw will do multiple cuts, a 90 degree up and down cut, which is a cross cut. A miter or an angled cut is one that you would see on the corner of picture frames. These cuts are more often than not at 45-degree angles and made with either a bevel saw or something similar. The bevel cut is one that’s goes through the thickness of the wood, as I previously mentioned think door stop.

What is the Difference Between a Single and a Double?

I’ve established that a bevel cut is one where the cut is made through the thickness of the wood at an angle. So what is the difference between a single and a double bevel? A single bevel is one where, as the name suggests, can only make the angled cut in one direction. If you wanted to make the same cut in the opposite direction, you would need to flip the board over to make the same cut.

Alongside, if you are looking directly at the unit, you will notice that the saw won’t move past 90 degrees (often to the right). Taking these factors into account, you can probably make a good assumption as to what a double bevel is. It is a miter saw that will bevel in both directions, meaning you won’t have to flip the wood you are cutting to make the same angled cut in the opposite direction.  The wood remains on the tool and you simply swing the blade over. Now I understand the difference between the single and the double unit, how do you know which one is right for you?

A single bevel miter saw is ideal for both DIY enthusiasts or hobbyist and contractors alike. They are often more affordable than the double bevel equivalents, so for a first time buyer this may seem like a more attractive price than the alternative. If you think you are only going to be making cuts in one particular direction, then the single bevel is ideal for you. If you are well versed in single bevel miter saw use, then you will be comfortable marrying up angels and making sure they match. New users may find this difficult and it does take time to hone and perfect this skill.

Whether you are a professional contractor or a keen DIY’er, a double bevel miter saw will be an excellent addition to your tool shed or tool box. If you are a contractor who has to work to strict deadlines, the double bevel miter saw will be the option for you. As you don’t have to move, flip and then realign wood to make matching cuts on opposite sides, this will save you a lot of time. It will also save your resources, as if you get the angle even slightly out on a matching cut, you will need to start again. The double bevel is also good for a DIY’er who is happy to spend a little more money but isn’t that confident in making their angles match.

Considerations Before You Make the Purchase

Before you buy the single or the double bevel you need to consider how you will be using it. If you think you’re going to be using it infrequently and think you’ll be good at matching angles and are already versed in this, the single bevel unit is for you. If you are working on a project with a tight deadline and will be using it to complete most of your tasks. It might be worth looking at the double bevel saw, both will be fantastic additions to your tool box or shed, which ever you chose. It is also worth noting that single and double bevel saws also double up as smaller chop saws, so not only do you save money you also save on space!

The key difference between the single and the double bevel unit is that the saw on the single unit won’t exceed a 90 degree angle; it can only cut one plane. The saw on the double bevel is able to swing over and complete the same cut on the opposite side. Both are good options irrespective of experience but there is often a price difference between the two, if you are looking for lower priced bevel saw, then maybe the single bevel is the best choice for you.

If you want to spend a bit more, the double bevel is also a good option. Both will do the jobs that you want it to as both is capable of making the bevel cuts. It is just that it will take slightly longer on the single bevel, as you will need to take the time to move, flip, realign the piece of wood and then ensure that you are able to make cut at the same angle.